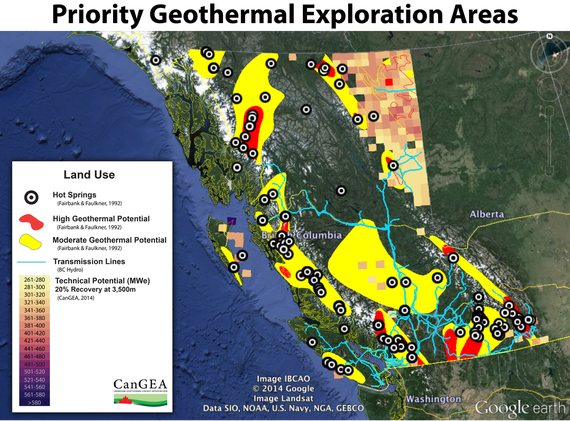 Below you will find the data produced by the British Columbia Resource Estimate Mapping project created using the NTS (National Topographic System) grid cell data commonly used throughout Canada. The data has been made available to you to download and use for personal, academic and business use in order to assess and identify geothermal resource potential. The data is intended to serve as a geothermal exploration tool for making informed business decisions and mitigating investment risks.

The Google Earth program is required to view the following maps. Click here to download a free copy of Google Earth. 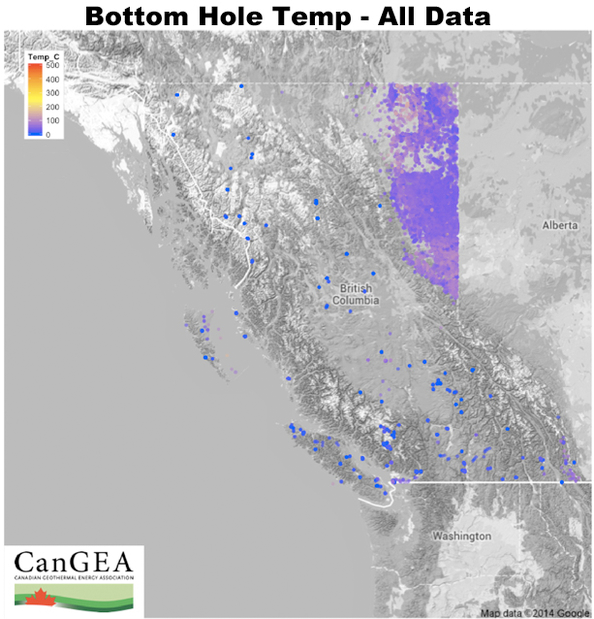 *It should be noted that all of the stated values are approximate and are only relevant to the data that we have available and thus do not fully represent the entire geothermal potential of British Columbia.

The NTS system is a grid that has a cell size of 15’ latitude and 30’ longitude that divides British Columbia into individual grid cells. The local thermal structure is estimated for each of the grid cells using a 1D heat conduction model, and then the total potential in the region is estimated by summing together the discrete estimates of each cell. As there is a significant amount of data available for North East BC, this area has been highlighted in the summary.

The British Columbia Resource Estimate Maps project has included an estimate of Theoretical and Technical Potential as detailed by the methodology in the Global Protocol for Estimating and Mapping Geothermal Potential. Theoretical and Technical Potential are defined as follows:
Below the following graphs and table you will find further information and descriptions concerning the classification of Inferred and Indicated Resources. Summary graphs and table are presented with corrected bottom hole temperatures.
British Columbia
Following the Canadian Geothermal Code for Public Reporting, the Reporting Code maps represent the level of confidence that has been assigned to the data found within each grid block. This was done by analyzing the data points according to the Reporting Code and subsequently classifying each block as an Inferred or an Indicated Resource, suggesting a lower or higher level of confidence, respectively.

The Inferred category is intended to cover situations where a Geothermal Play has been identified and limited measurements and sampling completed, but where the data is insufficient to allow the extent of the Geothermal Resource to be confidently interpreted. It is based mainly on indirect measurements, such as the extrapolation of temperature profiles (to a reasonable degree and on a rational basis) and other associated measurements such as rock properties and heat flow, and requires a reasonably sound understanding of the subsurface geology in three dimensions derived, for example, from geophysical surveys, to indicate temperature and dimensions.

The Reporting Code was prepared by the Canadian Geothermal Code Committee and published in 2010. It is a required minimum standard for public reporting. If you would like to obtain a copy of the Code, please visit the “Code."

Google Earth Maps
The Google Earth program is required to view the following maps. Click here to download a copy of Google Earth. The maps were generated from uncorrected (that is, conservative) bottom hole temperatures.

Priority Exploration Areas
Maps
If you are unable to use Google Earth to view the maps, or prefer to view images of each, you will find a PDF document of all of the maps created for this project below:
BC Database
Below you will find the databases used for the generation of the British Columbia Resource Estimate Maps. 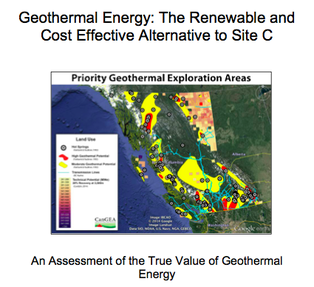 C$9.99
Add to Cart
***NEW REWORKED VERSION COMING SOON***
This 60-page report provides an assessment of what CanGEA believes to be the true value of geothermal resources in British Columbia. Moreover, it is asserted that geothermal energy as renewable, cost-effective alternative to the Site C hydro dam proposed by BC Hydro. This report builds upon Joint Review Panel (JRP) of the Site C Clean Energy Hearings. The hearings concluded that: “a failure to pursue research over the last 30 years into B.C.’s geothermal resources has left BC Hydro without information about a resource the BC Hydro thinks may offer up to 700 megawatts of firm, economic power with low environmental costs.” CanGEA was granted interested party status at the JRP hearings, and this conclusion largely stems from CanGEA’s submissions. CanGEA considers this number, or 700 megawatts, low. To ensure the true value of geothermal energy is assessed, CanGEA has released The 10 Advantages of Geothermal Energy not Considered by BC Hydro or the Joint Review Panel. Seven of these are economic considerations, and the other three address socio-economic and environmental considerations.

The purchase of this report includes a summary backgrounder. 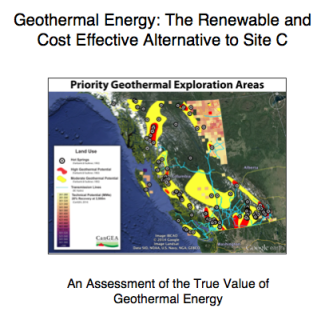 C$1.99
Add to Cart
A short summary of the key findings.
CURRENTLY BEING REWORKED - STAY TUNED FOR REWORKED VERSION 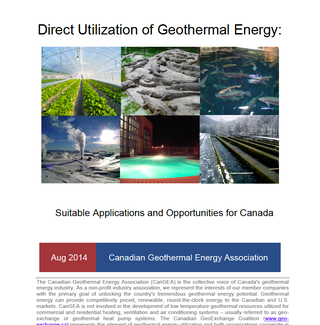 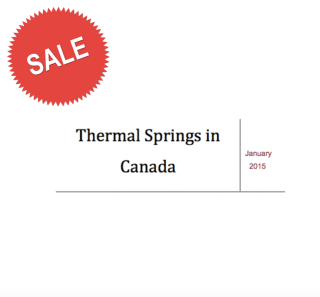 C$599.00 C$99.00
Add to Cart
This 25 page document is a compilation of historical data collected from Canada’s 157 known thermal springs. It includes valuable information including the approximate location, water chemistry, temperature, and volumetric flow readings of most thermal springs in Western Canada.  CanGEA’s improvements to past work include verification of and updating all values that are publicly available. The CanGEA project also made use of the data in two geothermometers to estimate reservoir temperatures and heat flow.  Thermal springs for which sufficient data is not currently available have also been identified with the expectation that future surveying and sampling may be conducted to fill knowledge gaps.  Meta data is also available in a spreadsheet format and is expected to be released later in 2015 (included in the cost of the Thermal Springs in Canada report).

Of special interest to the Mining sector, this document includes single sample readings for silica, sodium, potassium, calcium, magnesium, lithium, chlorine, sulphate, and   bicarbonates. A growing international trend is to harvest these valuable commodities via the co-production of geothermal power and heat.
Biography of Geothermal Resource Assessment Lead, Qualified Person